Disney on My Mind... 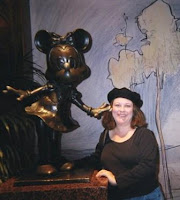 So, turns out the woman who was reported "kidnapped" simply grabbed a fake i.d. and ran off to the Grand Floridian Resort in Disney World. Whil part of me realizes that she must be a sad, troubled woman, part of me is thinking..."Why didn't I think of that?" My feelings of sympathy are all mixed up with a pinch of envy. Maybe it's being on the cusp of summer, knowing we can't go this year. Maybe it's the episode of Full House where the Tanners go to DisneyWorld buzzing in the background (a guilty pleasure...).

Last year, close to this time, Mikey and I took an impromptu middle-of-the-marriage honeymoon to DisneyLand (California), and next year we're planning a 20th Anniversay 10-day trip to Florida (with the kids, of course!)--so this year seems like another of those midpoints. But, it all goes to the goal. We go to Disney about every other year, and every other year I come home with picture after picture where I'm disappointed in how I look. Right now, I'm a full ten pounds heavier than I was in this Minnie portrait. So...it's the one-year count-down...working toward a mini-er me for next year!
So, in the meantime, it's another summer of Six Flags Fiesta Texas--look for me at the waterpark all sunscreened up with a book! But, to keep the Disney dream alive...I figure by this time next year, given my nightly 3-mile walk with Stella, I will have walked the distance to Orlando! How's that for inspiration?
And you? Any plans for this summer? What's inspiring you?
Posted by Christmas with CWG at 9:22 AM