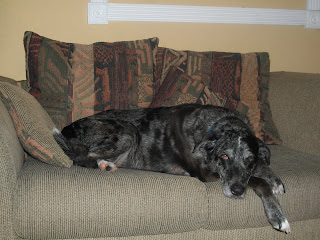 For those of you who have read Saturdays with Stella, you know what a treasure she is to us. And, if you subscribe to my newsletter, you know that, just over a year ago, we inherited another dog...Joe. Joe belonged to my father-in-law, Wayne, and when Wayne passed away last year, Joe became part of our inheritence. He is, in many ways, like Wayne. Gruff and stubborn, he moves around with a distinctive limp. When we first brought Joe into our household, I admit I was less than enthusiastic. My standard line was this: "The bad news is, he weighs 85 pounds; the good news is, he's 13 years old."

In recent weeks, though, Joe's health has taken a sharp decline. He's obviously in a great deal of pain. In fact, he moves only from the door, to his big pillow, to the food dish, and back. His evening walks are little more than a few steps out of our alley gate, and he returns from that exhausted. He's relentlessly incontinent, and intermittently aggeressive. So, it's time.

It's a huge, grave, daunting responsibility to hold the life of another creature in your hands. Dog or not, Joe embodies a lifetime of memories with us. I remember his puppyhood--even though his "puppy" size was enough to knock over my then-toddler sons. I remember him running head-first into the van door when I shut it against his invasion. Tiny little dent, there--in the door, not his head. I remember him running through cattle fields on my inlaws' land, tearing down the drive to usher in the visiting family (I was always terrified we'd run him over). Most of all, though, I remmber the days and weeks and months after my mother-in-law, Jean, died, and Wayne would walk for hours and hours with Joe at his side. He loved that dog, and when Wayne went into the hospital, Joe was left at home alone for a while. Nobody knew Wayne wouldn't be coming home from that visit, but I think somehow Joe knew. When we brought him to our home, he had large patches where he'd worn his fur clean away--great big bald patches the vet said was due to stress. And, I believe, to sadness.

And so, on Saturday, Joe and Wayne will be reunited. I'm a firm believer in animals in heaven. Scripture assures us that the new Earth will have all the creatures that the old one has. Joe is God's creature, and he was Wayne's best friend. I have the most beautiful picture in my head of Wayne in Heaven, turning around, and having his already-complete joy doubled over at the sight of Joe--fully restored--bounding across some patch of paradise to meet him. 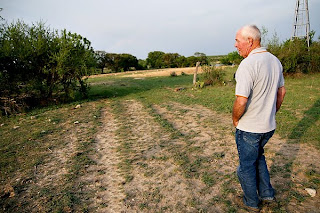 Posted by Christmas with CWG at 6:55 PM