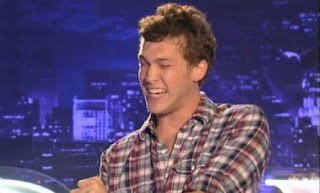 I wasn't going to watch. Really. After last year, watching the confetti rain down on Scotty McCreery, each shred of it representing an ill-cast vote, I told myself, "I don't care. I can't go through that again. I can't go through months of wasted anguish and hours of conversation, facebook posts, blog posts, texting, squabbling...I have better things to do with those 2-3 hour a week--and that's just the watching."

I was resolved no longer to singers...

I practiced my resolve all year. I had a brief dalliance with The Voice, but the fact that it had both judges AND mentors...too much of a commitment. Plus, the complexity of the show, the whole system of it was way too much for a rebound obsession.

Then, during the summer, when the rest of the country was convinced that America's Got Talent, it only took watching one episode for me to decide that no, no. We really don't. Besides, AGT has those litte kid singers, and nothing freaks me out like a operatic 10-year-old. Creepy.

Then, I totally forgot about the X-Factor. I meant to watch it, really--hoping that Simon and Paula could re-kindle the spark we once shared. But there again, kids. ugh.

And I thought--hey! I can do this! I can live in a world where hopeful singers pander for audience support, believing in their marginally talented little hearts that they can BE somebody, they can be a STAR--and that can all happen without me. Go ahead! Hold my feet to the fire and ask me for even the vaguest description of the winner of The Voice, or AGT, or X Factor. I couldn't do it. I used to pity those people--those who don't know the difference between Kris Allen and Lee DeWyze, those who don't clearly remember the night Jennifer Hudson went home, or the last outfit Mandisa wore on the stage, or who auditioned only to make David Hasslehoff cry. People who don't remember JPL the pencil salesman, or who Carrie Underwood beat. Those sad, sad souls who've never seen From Justin to Kelly. (ahem...10 times). And now, I was one of them: the functioning uninformed. I was thinking: I can do this! I can beat the idol!

But then, 3 things happened.
(1) Kelly Clarkson performed on Saturday Night Live--more amazing than ever, bringing waves of nostalgia flooding o'er me...
(2) The show was already programmed on my DVR from last season (it's so hard to let go...)
(3) It was too cold and windy to walk the dog.

So I watched the first three minutes, that opening montage of hopes and dreams. Tears welled in my eyes (historical writers say stuff like that...), the sofa settled around me. A tiny black-and-white photograph of Taylor Hicks (stashed in the background behind Randy) reminded me of how much I LOVE this show.  Minutes later, a 17-year-old who BEAT McCheesy in a local talent show the year before busted out with a pure and perfect "Never Can Say Goodbye," capturing a pitch-perfect, unspoiled Michael Jackson. By the time Phillip Phillips did his own busting with an accoustic/country/funkified "Thriller," I was hooked.

So...what'd you think? Check back from time to time! Because...THIS is American Idol.
Posted by Christmas with CWG at 7:17 AM