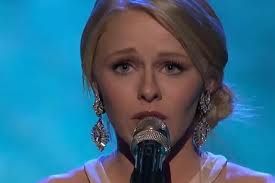 Ryan does it every year when it's time to whittle the contestants down from seven to six. Three on one side of the stage, three on the other, and a safe #7 left to decide which group is which. Jason Castro sat down on the floor between the two, starting the trend of refusing to choose, and last night Skylar did the same. Even though it was a no-brainer, with Hollie, Phillip Phillips and Colton--Hollie a veteran of the stools of doom--on one side and class pets Jessica, Joshua and Elise on the other. And then--shock of all shocks--the pets are in danger.

The Idol universe is a cruel one, not for the faint-hearted, and while all they hype left the judges in shock (or, more likely, mock-shock), me, not so much. Some question the voting practices, thinking there must be a fix or manipulation, but I don't think so. I could be wrong, but I'm going to continue on as if I'm not.

Let's face it, the producers tried everything they could to shut down Holliebot Wednesday night. Suggesting the self-reflective "Perfect" song in which the lyrics beg our girls to love themselves the way they are. Who could miss the irony of our Hollie turning those very lyrics on herself, and not believing one of them. Don't get me wrong, she's a beautiful girl and a GREAT singer. I listened and relistened to her performance. No, not perfect, but far from awful. But watching her sing--it's like watching math happen. And not cool, sexy math like Matt Damon in Good Will Hunting.  And, oh, that critique, with JLo offering the Judas Kiss of "You look beautiful tonight," and culminating in, "We'll see what happens." All while the audience sat in absolute silence, like Jimmy Iovine had paid assassins set to silence the first "Boo." And if that's not enough, adding her to the trio with J and J, like she's the kid who was absent on lab-partner-picking day and the teacher had to go from duo to duo saying, "Is it OK if Holliebot sings with you?" Luckily Elise and Phillip Phillips were out sneaking a smoke at the time.

So--when Ryan first pulled these two girls, Holliebot on one side of the stage, B.B. Chezon the other, I knew Holliebot was safe. One, because Ryan's not exactly subtle when it comes to trying to build suspense, and Two, because you'd have to be pretty heartless not to throw Hollie some love during voting. On top of that, this is America, gol'darnit! We do not like being told what to do. Little Hollie is the Ron Paul of American Idol; Jessica Sanchez is Obamacare. Sure, she'll probably win, but not without a kerfluffle of a fight.

So, after sweeping Jessica free from the jaws of going home, there are no more saves. Now it's just a bunch of vocal gladiators battling it out. Contrary to what Randy would have us believe, none of these kids deserve to win. It's a sport, a game. They're hand-picked and equally matched. And, besides, dude, she's right there. Behind you. And we all know you're basically saying Hollie should be going home. Not cool.

I'm pretty sure Randy will never read this, but don't tell us we're wrong. We have power. We got Diana DeGarmo all the way to #2 and gave the whole shebang to Lee DeWyze. Ever hear of Taylor Hicks? Be very careful, or your bosses will be investing a lot of money in a future Disney animated princess voice.
Posted by Christmas with CWG at 7:15 AM