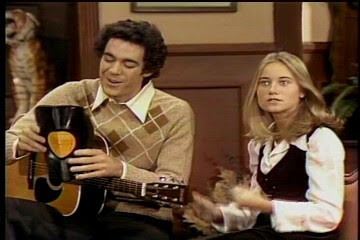 I am not a person without opinions. I'll fight to the death to defend my peanut butter (Jif Natural), will mercilessly mock Lady Gaga, and there's a certain well-known, well-loved novel floating around out there with a title I can't pronounce without a sneer. Seriously, don't get me started. And yet, here I am, watching the last two Idols standing, and I just...don't...care. Scotty and Lauren. Oh, ok. I christened Scotty "McCheesy" in the first week, and never did get around to creating a nickname for Lauren. (I briefly toyed with Kelly Underwood, but that seemed too literal.)

Anyway, this is what America, in its 10th attempt at creating a star, has given us. Those of us who have been around for all 10 seasons might recognize this dynamic. It's season 1's Justin and Kelly. (Raise your hand if you saw the movie From Justin to Kelly. Just me? I had to bribe my then seven-year-old sons to go with me. They were supposed to get a puppy. I welched.) Now, Lauren is nowhere near the vocal powerhouse that is Kelly Clarkson (Kelly performed many a number with a "blown-out" voice), and Scotty could sing oddly to-the-left-listing circles around Justin, but if this were a contest about vocal ability, we'd be watching James and Pia right now instead of the best acts available at the Corn County Fair. Really, is there ever a point in the serious world of music entertainment that calls for a ballerina skirt and cowboy boots? I wore that same outfit when I was 4.

My esteemed editor (and not just because there's a certain book I really, really want to write...) referred to this as the Very Brady American Idol. Clean, pure, harmless. No fire, no sexiness. Beloved by mothers and grandmothers (who wouldn't want their child to come walkin' up the front porch with one of these two cutie-patuties?)-- but they've been singing the SAME SONGS for 3 months. No surprises. They've brought nothing new to the stage--nothing new to the muscial landscape.

Taylor Hicks may have dropped to small-club obscurity, but he was interesting. We'd never heard a voice like Fantasia's before. Even Carrie Underwood and Bo Bice at least set up a nice dichotomy. As did Blake and Jordan. Adam and Kris? Please--downright good vs fabulous. And last year? Didn't you spend the whole season just wondering what Krystal would do? On the bright side, with songs about dreams and moms--can you imagine a more Republican finale?

And, so...it's Scotty and/or Lauren. And of the two, I--like Steven--am giving it to Lauren. I'll never understand the Scotty appeal. (or, uh-peel, as he would say...). 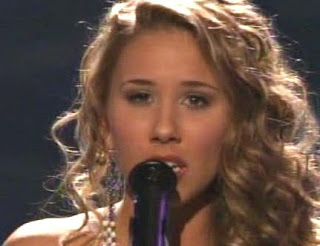 It's the point where really, any sane person should be able to see justice and reason in the victory of any one of the remaining four. Unfortunately, sanity isn't always the ruling factor for the average Idol fan--myself included. But here we are in the final stretch, and now it's all about strategy. Not talent, not future career, not defining yourself as an artist, but what is it going to take to win. To have your name seared into the confetti that will be dropped over the heads of all. And, clearly, some of the remaining singers have a stronger grip on that concept than others.

Raise your hand if you knew James was going to sing a Journey song at some point during the competition. Personally, I'd stopped believin' that his rendition was ever going to end. This was a song choice meant to garner votes. We love Journey. We love that song. Fox television loves that song, because Glee does that song. It's an anthem for a generation, so for me, it was a totally ho-hum choice. Now, "Love Potion #9"--that was cool, unexpected. Overall I left thinking that James is much more suited, though, to front a band rather than embark on a solo career. Just a thought. If Journey (or some other 80's revival band) finds themselves trolling through YouTube videos looking for a new lead singer, maybe James should get a shot. He has kind of an old soul for that. Like, can't you hear him singing "Juke Box Hero?"

The case for Haley--she, obviously, gives neither a hoot nor a holler what we're going to think. Every other singer last night showed such obvious strategy. And when she sang the Michael Jackson song I'm too lazy to Google and look up, she took a risk. There was a time when Idol rewarded risk. And I can see nailing her if she hadn't sung the unknown song well, but to blast her for not choosing something the audience knows? Nothing wrong with a little stretch in the home stretch, Jennifer. Well done you, Steven, for staggering to her rescue. I must admit, though, given Haley's hair style, I half expected her to bust into "Oh, sweet mystery of life at last I've found you..." If Haley goes home, chalk it up to America's fear of the unknown. What in the world would we do with her? We can't bang our head, or dance a two-step, or reach into a cooler filled with Mike's Hard Lemonade with her voice in the background. We'd have to listen and absorb. Perhaps be bemused and entertained. NEXT.

The two sides of Scotty--slow country and fast country. One video with slow-motion black-and-white cornfields, the other "concert" footage with girls in tight t-shirts storming the stage. We love the familiarity of Scotty. We want him to grow up and marry Lauren in a sweet Country love story kind of way. (like Faith and Tim, not Vince and Amy) We've been listening to his voice since the crackling days of RADIO. He and James are nostalgia...Scotty is lucrative nostalgia. No matter who wins, I'm pretty sure he's the only one who will carve an actual career in the industry.

And Lauren. Oh, I love Lauren--and I'm only the tiniest bit weirded out by how much Steven Tyler loves Lauren. Here she is, the embodiment of sweet, innocent, pure-hearted teen-age girl. Like a Taylor Swift who can sing on key. How cute that our giggly girl didn't want to sing a lyric that said she was evil. How sad/odd that choosing a song without that lyric didn't occur to her. But, that's strategy. That's wanting to win--so, so bad. My heart will break if Lauren goes home tonight, and I will be haunted by Lady Ga-Ga's perma-goosed eyes.

So, no prediction tonight. With Jacob's final note wafting somewhere beyond the final planet, I'm content with the singers at hand. No single one of them deserves it more than the other. Clearly, the judges and producers want to hand it to James (probably because they're still stinging over Adam's loss); Lauren and Scotty are loved; and Haley just refuses to go quietly into that dark night. No prediction, but a bit of hope that the under dog will live to growl another day.
Posted by Unknown at 11:26 AM No comments:

Two Songs Too Many 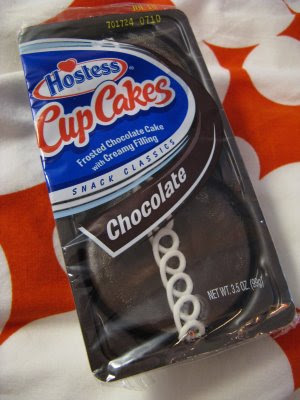 Knowing I'd have the house entirely to myself for the first hour of Idol, I treated myself to Hostess Cupcakes--you know, two-to-a-package, chocolate iced cakes with sweet cream filling and a little swirl of white on top. It seemed fitting, given the theme of the evening. Two cupcakes, two songs. A treat for tonight--a treat from my (not-so) long-ago childhood. I guess I could have had Zingers or Twinkies, but I tend to reserve Zingers for those times when I watch airings of Charlie Brown Holiday specials, and I never have cared for Twinkies. In fact, I doubt I've had more than 3-4 Twinkies in my entire life. Anyway, I settled in my new leather chair with 2 cupcakes and a ginormous glass of milk. My plan was to nibble throughout the hour, but I sort of scarfed them down before Randy finished his initial "inittowinit" missive. The milk I saved, planning to take a sip everytime Randy said "inittowinit." Like a non-intoxicating drinking game. Because, if it were an intoxicating beverage, I would have passed out before Jacob Lusk took the stage. Sigh. I miss my drinking days sometimes...

OK, I'm stalling, or maybe I found my trip down snack cake memory lane so much more satisfying than most of what happened on the Idol stage last night. So, clinging to my cupcakes serving as a metaphor they were never meant to be, here's my take on last night.

James--you are that kind of crusty, endearing stale-ness that assures me the cakes have been on the storehouse shelf a wee bit too long. Don't get me wrong, I still think the guy is more than marginally talented, but last night was an "off" night for him. Even flames get old, dude. And, sorry, inittowinitRandy, I don't buy the concept of being emotionally in tune. If that were the case, my weepy rendition of The Winner Takes It All would have earned me a shelf full of Grammys. (Grammies?)

Scotty--you are the cupcakes themselves. Yes, in this world of fancy-pants pastries and tiny gourmet desserts, the humble Hostess cupcake prevails. I am the first to admit I've never been a Scotty fan (past posts will confirm), but I was won over last night. Maybe it's the way he finally straightened out his microphone. Maybe it's the fact that he didn't fall on his Wranglers after leaping the steps toward the judge's table during his first song. Maybe I didn't vote for you quite as often as I could have, but you were always on my mind...

Lauren--you are the sweet, creamy center. A little hidden treasure. True, a few close-ups during her second song made me think I'd lived through a time warp and was actually watching an old episode of the Mandrell sisters, but chalk that up to the hair. "Unchained Melody" is famously Simon Cowell's favorite song, and she sang itwith such vulnerability and softness, he might have cried like James.

Jacob Lusk--you are the nutrition label. Your performance is the equivalent of the nutritional value of the cupcakes. Yikes! BOTH cupcakes (because the serving size is 1). Lesson: if you're 1 person, don't sing songs recorded as a duet. If you don't have 1 Nazareth song on your ipod, don't sing their iconic hit. If we're only sending 1 contestant home, please let it be Jacob.

Haley--you are that distinctive little swirl on top. Nobody knows quite what to make of you. Without the swirl, the cupcake would taste the same, but would just be "off." Personally, I thought she stole the show, giving James good reason to cry.

Posted by Unknown at 6:14 AM No comments: