And by "brat" I mean Simon---but I'll get back to that in a minute. I've just realized that the deadline looming o'er me almost made me forget to get my post on. The world would probably survive, but my power of prediction is a true source of pride, so I want my vision on eternal record. Even if I'm wrong. Or, as I like to think of it, even if America is wrong...like they were last week. Because, really, think how great Anoop would have done this week. I'll bet he sings "My Funny Valentine" when he shaves in the morning--or at least did back when he used to shave.
So, without further Anoop--my thoughts on who was the leader of the Pack last night.
Kris--love him, love him, love him...didn't totally love the song last night. Still, I thought Simon was waaaaay out of line in his criticism. It's almost like the producer's pick is about to be edged out by this "dark horse," and somebody doesn't want to see it happen. Hmmmm...AI conspiracy? Never. Still he was adorable, and should be totally safe tonight.
Allison--now, what was I saying about AI conspiracy? Because Simon--grrr! This is the first time this season I truly wanted to reach through the screen and slap him. Allison was uh-mazing, and then just so sweet and humble (truly taken aback, I think) when he asked if she thought she could win. I mean, how easy would it be for her to get all snide and snotty and throw all humility to the wind...
Which brings us to Danny. Now, in all fairness, I must say this is the FIRST time I've ever actually enjoyed a Danny Gokey performance. He's been seriously under my skin since the audition. So, yeah, yeah, he's gonna be in the finals. It just might be nice if he could pretend to believe that another singer belonged there with him.
Matt--why did he save him? Because he couldn't get his deposit back on the hat? Once again, Simon...grrrr!!
Finally, of course, I am a total Adamite, and once again he was amazing. During the afternoon, my agent and I emailed back-and-forth trying to guess what song he would sing. My vote was for "Candyman" he thought maybe "The Lady is a Tramp" (both suggestions firmly tongue in cheek, of course.)
So, prediction time...OK America. By now the decision is made--and I'll actually know in a matter of hours. I'm saying Matt and Allison are probably in the bottom two, and somewhere out there is a piano bar and tip jar with his name on it. Hopefully, he'll be there Friday night.
Posted by Unknown at 2:21 PM No comments: 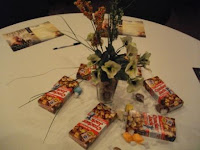 So...a lot to talk about in one little post--partly because I haven't posted in a few days, and partly because it's one of those times when a bunch of stuff happens at once.
Launch Party!! Last night (Monday) I had a modest little launch party for my new book, Stealing Home. I hi-jacked the first hour of my regular writers group meeting and treated them and a bunch of friends and family to snacks in keeping with the spirit, setting and theme of the book...hot-dogs, Coca-Cola and Cracker Jacks. I gave a little talk, did a little reading, and had a lovely time. I'm just so excited about this book--it's truly the book of my heart, and, as promised, one of my blog followers will win a signed copy, and the winner is...diamonds, daisies, snowflakes...THAT GIRL!! So, THAT GIRL, email me privately your address, and I'll get a copy in the mail to you.
And, the winner of Tamara Alexander's The Inheritance is WindyCindy...so, WindyCindy, email me with your address and you'll inherit this great read!
Finally, lest we forget, it is Tuesday, and that means Idol, and once a year we have that wonderful night when Idol meets Disco and all seems right with the world. In the interest of keeping my prediction reputation on the line, I'll skip the lengthy re-cap and just spill my thoughts. Two people are going home, and those people will be Lil and Matt. Because, really, didn't both of them sound like some horrific office Christmas party gone terribly wrong?
Posted by Unknown at 8:03 PM 4 comments:

OK, either these guys need to see more movies, or I need to just embrace the power ballad, because this was one hum-drum night of American Idol. In my humble opinion, of course. It was like one long soaring (sometimes souring?) note. And personally, I would rather have listened to all 4 judges give feedback and cut the Quentin Tarantino "coaching" -- but that's just me.
So, a couple of questions...did anybody else think Allison was way, way off key? I was cringing through the whole thing, then it was like extra scoops of praise from Paula and Simon. Are my ears that off?
Then, a bunch of other people sang--Danny got contacts, which, in the world of sit-com evil twins should make him unrecognizable. Adam gave the one performance that didn't sound like it came from a dentist's office, Randy hated Kris, Lil chose the wrong song...again...and it was over.
I'm having a tough time calling it tonight, but based on performances, I think Allison and Lil should be in the bottom two. Allison's been there before, of course, but Lil did get the sweet last spot, so it might be Matt. Anyway, the Judge's Save is still in place, and the only contestant who wouldn't get that second chance is probably Lil. So...out on my limb here, but I predict that, actually, nobody'll go home.
Am I right? Am I wrong? And if you could choose another soundtrack ditty for any of these guys, what would it be?
Posted by Unknown at 8:40 PM 2 comments:

You've Got to Read this Book -- The Inheritance 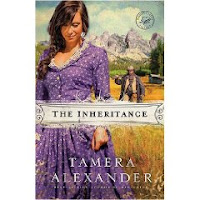 I am, of course, a fan of good historical fiction, and I'm also a huge admirer of Tamera Alexander's work. She and I sort of hit the Christian fiction scene at the same time, and I must say as I grow, I hope to follow along her path. She is a gracious, beautiful woman herself, and her books reflect that inner beauty.
The Inheritance is a lovely tale of family--the struggle to put together new ones, and the hard work it takes to maintain the one you have. Here's a quick look:
Determined to tame her younger brother's rebellious streak, McKenna Ashford accepts her cousin's invitation to move west and to begin again. But she quickly discovers that life in Copper Creek, Colorado is far from what she expected. Shouldering burdens beyond her years, McKenna tries to be the parent Robert needs, instead of the older sister he resents. But an "untimely inheritance" challenges her resolve at every turn, while also offering a second chance to restore her trust--and perhaps even her heart.
U.S. Marshal Wyatt Caradon is dedicated to bringing fugitives to justice, yet years of living on the trail have taken their toll. When his path intersects with that of McKenna, he comes face-to-face with a past he never wanted to relive--and the one woman who can help him find the future he's been longing for.
As McKenna struggles to let go of her independence and Wyatt considers opening his heart again, they discover an inheritance beyond imagination. But it will come at a price.
My take: I really loved The Inheritance not only for the love story you expect to unfold, but for the powerful brother/sister relationship that unfolds alongside it. McKenna is a character of wonderful dimension and depth, and Wyatt Caradon sheds the darkness of his past before our very eyes.
As with any good book, the title is multi-layered, as McKenna's inheritance is both measurable and immeasurable.
So, I'd love for you to "inherit" a copy of Tamera's book--especially if you are new to her writing. Leave a comment and tell about one of the greatest "treasures" you've ever inherited--tangible or otherwise--and be entered in a drawing to win a free, signed copy of The Inheritance. Drawing will take place Monday, April 20.
Posted by Unknown at 7:51 AM 3 comments: 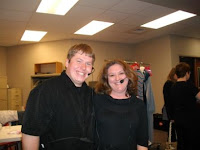 Lord be praised! What a fabulous Easter weekend this was. After months of being immersed in our church's Easter production, we finally took the sanctuary stage on Good Friday night, and on Saturday--three blessed performances, three chances to witness God's power over our lives and His calling on our spirits. And then, church this morning...powerful music, perfect sermon, and then the blessed ride home...
I know the traditional Easter celebration is that glorious Easter morning, but for me, I was just hanging on waiting for Easter afternoon. Not that I'm discounting the special recognition of Jesus' resurrection--that's something we should be celebrating every day! But I've been spending every Sunday afternoon for the last three months in rehearsals, not to mention the hours put in every evening this week. Yes, for a while now I've been looking forward to coming home from church on Easter Sunday, sitting down to the Stouffer's Lasagna waiting in my oven, then collapsing for a well-earned nap.
Which I did. For, like, 3 hours. The first long Sunday nap of 2009. You can see my behind-the-scenes pictures here, but to get a sense of the power of the performance, check out the video on my facebook page--http//www.facebook.com/allisonpittman#/profile.php?sid=206562ad81baf8f288bb163562b25e81&id=1041377619&hiq=allison%2Cpittman&ref=search

So, what does it say about the business of my life that I can only manage to post my Idol rundowns? Here's hoping that, once Easter has passed (I'm directing our church pageant) I might be able to address a few more meaningful things. Until then...

I'll spare all of us the singer-by-singer rundown for tonight, because I think the writing's on the wall for a couple of people tonight. Lil, Scott--sorry...looks like your run is going to end tonight. Or at least it should. Tonight more than any other shows a great big ol' gulf between what you bring to the stage and what, well, everybody else does.
With that, I'll limit myself to just two raging rants...First, the Danny/Kris conspiracy. So I thought it was cool that Danny did a kind of jazzified "Stand By Me," and I found myself totally agreeing with the judges. Then, Kris did a cool jazzified "All She Wants to Do is Dance," and the judges ripped him apart. Hey! Maybe if he didn't have to perform in the midst of a bunch of swaybots he could have delivered a more interesting performance. Sorry--Danny's been a producer's favorite from the get-go, and heaven forbid anyone else tip-toe into his spotlight.
Rant #2 is aime squarely at myself. Wait, no, myself and the Idol producers. Wait, no, myself, the Idol producers and my STINKIN' DVR that totally cut off Adam's performance! I left the room for a second, came back, and Simon was giving a standing O! So, in shock, I attempted to rewind, hit a wrong button, and lost that performance perhaps forever. Or until it's on line. Sheesh!! So, somebody comment! What'd he sing? Was it wonderful?
And what song from your birth year would you take to the Idol stage? Me? It's a three-way toss up between "Good Lovin'" by the Rascals, "My Love" by Petula Clark or "You Keep Me Hangin' On" by the Supremes. Of course, ask my mother, and she would have me singing "Wild Thing..."
Listen on the links below:
http://www.youtube.com/watch?v=N-1_d6bbM1I (My Love)
http://www.youtube.com/watch?v=yqlzgItsVSQ (Keep Me Hangin' On)
http://www.youtube.com/watch?v=zsWTnWtszCI (Good Lovin')
Posted by Unknown at 8:21 PM 1 comment: