You Made Me Get Up 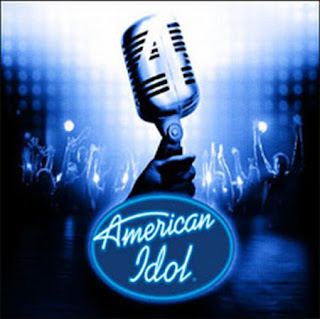 If there was one lesson to be learned on last night's American Idol it's this: you can run from Tommy Hillfiger, but you can't hide. Last week some of the contestants chose to stray away from last week's fashion advice, so today they were locked in a little room with samples at the ready. "Look, Phillip Phillips! A gray t-shirt!" That'll teach you to be who you authentically are.

So, if the fashion advice fell a little heavy-handed, the song choice theme was brilliant. Basically, the aspiring Idols got to sing whatever/whoever/however they wanted. And, really, I thought it was overall the best night of Idol in a long, long time. Especially given how many contestants still remain. Usually we're still weeding out the whackos at this point. But last night, humbled by Auntie Steven's smack-down, even Heejun turned out a vocally stellar performance. (my favorite of his, ever)

So--quick thoughts:
Colton--maybe on slightly shaky ground since he sang first, and an unfamiliar song--but he's got a strong fan base and I love him. So...
Skylar--the Red Solo Cup is alive and well
Heejun--quite the crooner!
Hollie--ummm...has she always had that accent? I totally don't remember that.
DeAndre--I wouldn't mind just a few non-falsetto notes. It's like Barry Gibb meets Milli-Vanilli. But in a good way...
Jessica Sanchez--Still sings a bit like a sing-bot. Super talented, but I worry what'll happen if she doesn't win. Like, she might stomp off and kick a pony or something.
Phillip Phillips--OK, we get it.
Joshua Ledet--Good grief, I love this song--somehow it's more powerful when a man sings it. A female vocalists just sounds pathetic.
Elise--Let's just say I've watched her performance 10 times. Amazing.

My bold prediction--rather than predicting a bottom three, I'll say this: only Heejun and Hollie are in danger of actually going home. They'll save anybody else.
Posted by Unknown at 2:26 PM No comments:

And So It Goes 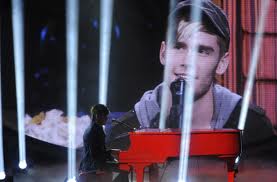 "Don't go changing to try and please me / You never let me down before."
Sigh--if only that were true. But you know that Idol has let us down plenty of times before, and last night was more of a let down than not. Beautiful songs should be handled with care, and it's always a crap shoot when the night's theme comes down to songs from an amazing songbook. True artists will respect the timelessness of a melody and lyric; wannabe legends will assume they have to deconstruct and make it their own. I guess that's inevitable given the mix of feedback from the judges. "Make it your own!" "Don't lose the melody!" "You did your thing!" "You lost me!"

Deandre managed to sound and look like an Uptown Girl while singing "Only the Good Die Young." Honestly--I understand if the kids have never heard these songs before, but I assume they can read, right? And at some point, Deandre sat it an Egnlish class while some underpaid civil servant tried to make him understand poetry. There's a story in the lyric--the story of coaxing the virginity out of a reluctant girl. For goodness sake, stop jumping.

Erika--I'm so glad somebody finally put the weave out of its misery (we can only pray that Colton will someday have the same sense of compassion for the critter atop the hawk). She looked GORGEOUS!! What, did Tyra Banks and the ANTM Make-over Machine stop by? And, oh, oh, I love that song. She was one of the few artists who sounded like they were singing a Billy Joel song. Like there should be a tip jar on the piano.

Joshua--I admit, I listened to this from the kitchen while doing dishes, and hated it. So I hit "rewind," watched it, saw the choir, and hated it more. So, on Eric Clapton week, is he going to bust out the choir robes for his rendition of "You Look Wonderful Tonight?" Love him, but again--read the lyrics.

Skylar--sorry, I am just not a fan. Maybe if, just once, I could hear her sing something--ANYTHING--that didn't sound like everybody in the audience was holding a Red Solo Cup.

Elise--again, she gets Billy Joel. Understands the essence of the song, but she's just not American Idol. I would love to be in a smoky jazz club or hotel bar and listen to Elise. A fellow AI fan and I debated a bit on facebook, and I've re-watched her over and over. That last note is little and low and amazing. Poor girl doesn't stand a chance.

Phillip Phillips -- we have a lot in common, as I often make up aimless, tuneless, wandering melodies when I'm looking for my keys or something. Good luck moving up, 'cause I'm tuning out.

Hollie--so cute. Totally don't remember what she sang. Oh, yeah, "Honesty" (to be honest, I had to check the DVR). Not a good sign. I just want to hug her and reassure her that she'll be 40 soon enough. She looked like Shelley Hack. That's rarely a good thing. (I made a link for you youngsters)

Heejun's act has officially grown old. Now, I'm all for sarcasm (see above and, well, just about everything I've ever written in the facebook and blog-o-sphere), but there's a time when a joke sacrifices respect on the altar of humor. Yes, I chuckled when he said that Jessica Sanchez was his fashion icon, but then I just felt uncomfortable. And, obvioulsy, Auntie Steven was not amused, either. I must say, though, I did like the way he changed up the melody on the last chorus. If nothing else, it'll make a nice "sing for your life" song.

Ah, Jessica Sanchez, bathed in the golden light as she sings of her dream. So very, very Disney...

And, finally, "Piano Man." My friend Tina correctly predicted that Colton would sing this song--and I waited all show for this. Because I love him--skinny jeans, faux-hawk and all. But, really, pillars of light? Shiny red piano? Would it have killed the AI producers to give him--say, a soft spot and an overflowing ashtray? I mean, he looked like the mother ship was ready to beam him up--maybe that was just Tommy Hillfiger's way to resolve the hair issue, I dunno... I'm just grateful a choir didn't emerge to join him on "La-da-di-da-da-di-da-da..." Aw, but I love this kid, loved the song, and I too thought his choice of chords when his voice resolved was stunning. (Auntie Steven was on fire tonight!!)

So--what did y'all think? Leave a comment...I just want someone I can talk to.
Posted by Unknown at 1:18 PM 2 comments: 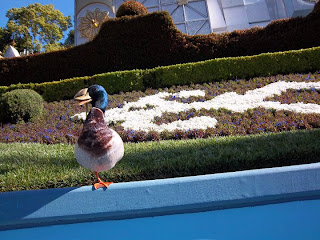 Last spring, on a weekend-long double date to Disneyland, I was riding in the big blue boat, just about to enter Small World, when I looked over my shoulder and saw this duck. Now, Disneyland is full of wildlife--ducks and rabbits and cats all roam around freely, but this duck wasn't roaming anywhere. Look closely...the little fellow was balancing on one leg.

Nelson, husband of our double-date couple, is an avid sportsman and hunter, and he told me about ducks that--due to tourists and campers over-feeding--sometimes ducks will stay at a lake or pond long past the time when they should be migrating. And unexpected freeze will come, trapping them in the water. The only chance they have is to flap their wings and pull themselves out--sometimes leaving a leg behind. Sometimes it's a necessary sacrifice; other times, it's a matter of panic. A few hours' waiting might bring out the sun, warm up the ice enough to make it break.

Speaking of break--my heart broke for that little duck, probably because I know exactly how he feels.

You know what I mean--life is good, life is easy, you're just swimming--unruffled on the outside, paddling like crazy underneath--and then...Freeze. Maybe it's one too many obligations, maybe it's the sure thing that didn't turn out to be. A broken relationship, a financial crisis, illness, betrayal, death.

You can't move. You're frozen, and it's either sit and starve, or flap for freedom. Because there doesn't seem to be any hope for a thaw. And the sun seems so slow... I can't tell you how many legs I've lost because I was too impatient to wait for warmth.

But, then again, I look at what happened to that little duck. Somehow, he ended up nestled in a land of topiary, still and peaceful as boatloads of happy people pass by. How did he get there? Only God knows--but surely God loves this little Duck. And, you might be an odd little duck, but He loves you too! When you feel life freezing around you...wait. And if you've already flapped your leg off, know that He will carry you. He's a big God in a small world.
Posted by Unknown at 6:58 AM No comments:

Everybody Needs a Waffle Iron

Years ago for Christmas, after the usual assurances that, if the gift wasn't perfect, we were perfectly welcome to exchange it, yadda-yadda, my grandmother gave us a waffle iron. Because, as she said, everyone needs a waffle iron. Never mind that, in all my growing-up years, my mother never made me a home-made waffle, or that Mikey and I, newly-weds at the time, found the the idea of making waffles borderline insane. So, given her implied blessing, we exchanged it for a Salad Shooter. Because, you know, everyone needs one of those.

Two years later, guess what we unwrapped? Yep, and we kept that one.

Last week, when my youngest son seemed once again disappointed that our meager breakfast offerings ended with cereal and/or toast, I asked him, "Well, what would you like? Name it, and I'll get it."

He said, "Waffles would be nice."

Bear in mind, my children have not lived poor, waffle-less lives. We've had waffles a-plenty--those nice, frozen ones that taste a little like the cardboard box they came in. But the moment Charlie made his wishes known, I knew I'd be bringing out the waffle iron. And, oh, how yummy the house smelled this morning with the steam pouring out; how beautiful the stack of big, golden waffles piling on the plate. All those years ago, Grandma told me that everyone needs a waffle iron; it wasn't until today that I realized how very right she had been.

Today is Grandma's 92nd birthday. What an honor and a blessing to have her in my life. She is a tiny, strong, feisty woman. Think of a brunette Betty White minus the vulgarity--because my grandma is a lady with hair that has naturally refused to go gray. She's the sole Democrat at the Sunday dinner table, which keeps our conversation clear of politics--partly becasue we don't want to offend her; partly because we're afraid she'll convert us. I've never seen her back down from a fight, but I've never seen her gloat in glory. She loves the Lord; she loved her husband for more than 50 years, loving him with the same giggling spark today even though the Lord she loves took him home 23 years ago. She makes an amazing cucumber salad (which I've never been able to replicate) and these thick, home-made noodles that make you weep for the Old Country--even if you don't know exactly what the Old Country is. And--we serve our noodles on a bed of mashed potatoes. That's right. Carb-on-carb. Take a lesson, kiddos.

I think Grandma has enjoyed a near-century of health and happiness because everything she is can be summed up in one statement: Everybody needs a waffle iron. Seek simplicity. Love your family. Stick to your principles. Eat a good breakfast.