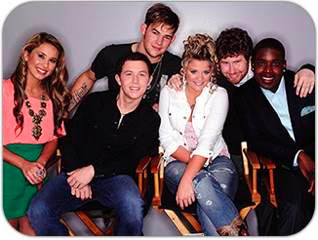 Remember when Tuesday nights belonged to Idol? Then, a little show named Glee came along, featuring young talent that deserved a clear 24-hour separation from the amateur hopefuls nervously grasping for glory in front of millions of judges plus three. This week, we had he premier of The Voice. Only those who watch absolutely NOTHING on NBC are ignorant of the show. Even if you didn't tune in on Tuesday, you've been inundated with advertisements, snippets and previews for months. I, of course, tuned in. I'll say this: I don't think anybody on the Idol stage would merit a chair spin. Oh, Blake Shelton might have fallen for the country tones of lil' Scotty, but only because those roots run deep. Everybody else-- my beloved James and Casey included--would spend three minutes looking at the back of those big, red chairs. But face it--Idol's never been about a Voice. No winner has ever come close to matching Kelly Clarkson vocally. (Notice I say no winner.) The only other winner to match (and exceed) Clarkson's success is Carrie Underwood, and her Cover Girl good looks might have a wee bit to do with that. Idol is all about presence and popularity--just look at all those cheeleader-worthy, swirly-letter signs in the audience. It's perpetual high school. Don't bother running for Student Body President if you don't already know a few hundred kids who will vote for you, no matter how strong your platform of healthy lunch options and SAT tutoring. You won't win.

Lauren: Is there any doubt at all that this girl dots her i's with hearts? Seriously adorable, and I'm such a huge fan. Did anybody else want to smack Miley Cyrus? Like, would you let your teenage daughter take advice from Miley Cyrus? I'd ten times rather let the girl spend Seven Minutes in Heaven with the anonymous 19-year-old than Five Minutes of Straight Talk with Miley Cyrus.

Most awkward performance: Casey and Haley.

Scotty McCheesy: (FFA) Most likely to fund a great musical career after the blue-ribbon sale of his prize lamb. Now, while his performance wasn't unpleasant, there's something a little bit locker-stalker when he sang "winter, spring summer or fall...all you have to do is call...and I'll be there" that would make me want to change my Math class and go the other direction during passing period.

James: This is the guy who, when it's time for the mid-term recitation of a Shakespearean soliloquy, would show up wearing a cod piece, brandishing his own sword. It's also the only assignment he's ever completed. But, thanks to a great pep talk from Guidance Counselor Randy, he's turning his life around.

LUNCH--just a time to observe that "Steve" doesn't know what bowling is.

Cutest Couple: Lauren and Scotty. Yes, even this calous old heart melts a little when they sing together. Their voices blend beautifully, and I can just look at Lauren.

Casey: Wore that exact same outfit to prom. Hat and all.

Now, was anybody else dreading the inevitable Jacob/James duet as much as I was (besides James, I mean...). Wow. It's like the moment when you realize you'll need to cast a girl to read Romeo because none of the boys will volunteer.

So, who's being expelled? I think Jacob, Haley and hm...maybe Casey will be lined up outside the principal's office, but it'll be Jacob calling his mom to pick him up.
Posted by Christmas with CWG at 8:14 AM