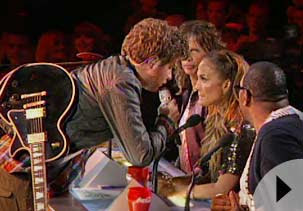 Hey, y'all! Yes, I know, I haven't re-capped the past two weeks because I've been a traveling girl. Arlington, DisneyLand, New Mexico--planes, trains, automobiles...all that. So I've been living off re-caps myself, though I did manage to catch last week's results show that sent Paul packing. In fact, I watched at my sister's house, in the company of my adorable nephew Bryan who is a huge Scotty fan. Little Bryan so touched my heart, I vowed to myself that I would vote for Scotty this week even though he is is a disturbing mix of country corn-n-cheese. But, more about Scotty later.

Hey! It's the 21st century! How's that for a nice, narrow little category. And we'll start it off with a resounding group sing by all the ousted ladies. And Paul. You'll never convince me that the producers didn't fully expect Haley to be in her own little black dress wriggling through the Pink song. Paul joined the ladies with all the natural flow of a goat stomping through a flock of baby chicks. And, you know how in church, every now and then you have to listen to the children's choir sing? Not the adorable 4-and 5-year-olds, but the 4th and 5th graders, and you're listening, and all of a sudden there's this voice that doesn't seem to have anything to do with the song the other children are singing? And you're thinking--whose kid is that? And silently feeling a little sorry for the parents who have to claim such errant tones? Yeah, that was Paul. His is not a talent that can easily mesh with budding pop princesses. Poor boy looked so lost...

Now, back to Scotty and the promise I broke to an adorable 8-year-old boy. Because, honestly. You have any song from the 21st century--a time when Country music really took on so many new flavors and crossed into pop charts (not that it wasn't doing perfectly fine in its own charts...) and you pick "Swingin'" by--hold on, let me Google it--John Anderson? And then you hold your microphone all sideways and sing all smarmy like you know the song isn't really about swingin' but you're a teenager so that's creepy too... Even if you do a career-altering switch-up by ending the song sitting on the steps--sorry, McCheesy. You should never, ever, ever sing a song with the word "lover" in it. Cringe. Bad choices all around, and kudos to the judges for finally calling him out on some of this nonsense. So, sorry Bryan. I could not vote for Scotty, but you know legions of people will.

Then James, the over-achiever of the bunch, wearing his jodhpurs and brandishing the microphone stand like a rock-n-roll ringmaster. Who's the poor sap who has to follow that? Oh, yeah...Haley, looking cute in a red dress, but it seems like a spark is missing. She was so amazing in the duet with Casey last week, but she looked a little defeated as the judges drizzled out tepid praise.

Wow! What a shiny suit Lusker van Dross is wearing. Next...

Casey sang a Maroon 5 song. I have a Maroon 5 station on my Pandora, so I was equal parts thrilled and apprehensive. Apparently, so was Jennifer Lopez. And her handlers. But, really, I thought he did an awesome job and has learned the lessons that only a judges' save can teach you. And, it bothers me greatly that Jacob wouldn't wear the fake Casey beard during the "dish on your competition" segment.

Looks like Stefano has finally learned to keep those big brown eyes open, which is a good thing if you're going to run all over the stage like that, given the OSHA hazard of unleashed red suspenders. The man gave us a performance worthy of high school talent shows everywhere. And, you know all the girls were just-a-swoonin'. (take that, John Anderson)

Finally, my sweet song bird Lauren, who had my own high-school sons swooning. (rather the 21st century swoon which consists of saying "she is so hot" through a mouthful of hamburger and cheetohs) I love Lauren. The mother in me wanted to add about an inch to her skirt (my sons heartily disagreed), and I secretly love that they think she's cuter than Haley. But, it's time for her to believe in herself a little bit. To quote the much less talented Miley Cyrus: "If you believe in yourself, anything is possible." Wow, maybe that girl can't sing, but she is deeper than deep. Here are a few more gems.

Bottom 3? This stage of the game is tricky, but I'm thinking Haley, Stefano and...(hate to say it) Lauren. I dream of Jacob in a thin silver chair, but alas, 'twill be a dream deferred another week. Going home? Haley.
Posted by Christmas with CWG at 6:32 AM