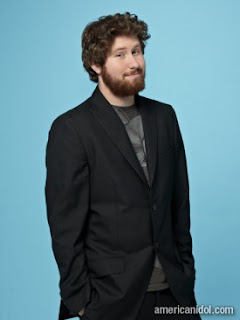 This is my first blog of this AI season--for lots of reasons. First, I never invest much thought until after the semi-finals. And second, I've found myself a million times more excited about the judges than the actual singers. Really--if I could choose where I could spend the next 2 hours, it would be either (A) sharing a taco salad with Steven Tyler or (B) brushing J Lo's hair. I didn't know if I could enjoy the show without Simon, and I haven't given him a thought until...well, now.
That said, I think the judges have a few kinks to work out, based on tonight's feedback. They were a bit too easy on the early singers. Randy kept it pretty real (dawg), but Steven and Jennifer seemed determined to keep it all positive. Until poor Thia. I guess by then they were just worn down, and after Ashthone-deaf and Pawful left a sea of broken notes across the stage, well, J Lo and Steven learned a new word: pitchy.
These are the hardest weeks on AI, waiting for all the chaff to clear and make way for those who are capable of providing actual entertainment along with the thrill of competition. Did the show seem endless to anyone else besides me? Being Baptist, I'm denominationally obligated to have some church activity on Wednesdays, so Idol's messing with my life by having a Wednesday performance show (thanks a lot, Glee!), so I get to watch the whole thing later in bed. The good news is I can fast-forward through the dull parts. Tonight, that meant much of the performances.
Still--I have my favorites: Casey, Thia and Naima. Going out on a limb this first final round and saying all three will be in the top five.
In case you want to spend a minute or so in my head, here's a brief re-cap of my percpetions of the night's show. The * notes who I'm predicting will be in the bottom three, with Ashthon as my pick for who should go home. (And, really, wasn't tonight proof that we should stick with 12 finalists?)

Lauren: Should have sung any song but that one.
Casey: Gettin' by with a little help from his friends (and a lot of help from back-up singers)
Ashthon**: um...awful...Jennifer said Ashthon should sing songs we can sing along with, which would be great, because then I could hear me instead of her.
Paul*: (to quote my husband from behind his Stephen King novel) "This is not good."
Pia: "Happy International Woman's Day" indeed. I feel bad, though. I didn't get my cards sent out...again.
James: I love James' voice. I just can't get past the fact that he looks like the kid who has a 3-episode story arc as the Canadian bad boy on Degrassi Jr. High. But, really...he's growing on me.
Haley*: Not sure if she's on the stage for American Idol, or Southeast Kansas Corn Queen--either way, am I the only one who thought, "Who is that?" before, during, and after...and zzzzzzzzzzzzzzzzzz
Jacob: I, too, believe he can fly.
Thia: Really, one of my favorites--And, might I say, way underpraised.
Stefano: Giving us a glimpse of what the world would be like if the Jersey Shore had talent.
Karen: Every now and then, I get this vibe that Karen answered J.Lo's ad for a roommate...SHF
Scotty: McCheesy
Naima: Very cool--like, that crazy cool. Like, the finale from "The Wiz" type cool. Breathless, but cool.
Posted by Christmas with CWG at 8:25 AM