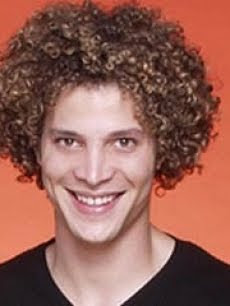 So, what does a guy have to do to be counted among such musical recording greats as Andrew Lloyd Webber, Barry Manilow, Randy Travis, Dolly Parton, Elton John, Lionel Richie, and -- oh, what the heck--Miley Cyrus? Apparently, you need to lose a singing contest. Ladies and gentlemen, Adam Lambert!!!
Now, I know a couple of weeks ago, I likened Miley's mentoring capabilities to that of a duck, and I just want to qualify something: I love ducks. So, it's not automatically an insult. To her, or to ducks. There's just something about the girl--her voice, her face, her lips--that makes me want to sit on a bench with old men and throw bread at her. Is that such a bad thing?
That said, I really think Adam did a good job. He set forth some challenges, gave some good advice, had something specific to offer each contestant. Spot-on mentoring, Mr. Lambert! Mayhaps the AI producers know what they're doing after all. Still, I can't help but think they're missing out on a few great opportunities. If they can trot Adam Lambert out, why not all the AI also-sang? No need for mentor-sharing, they could pair up! Imagine...(as DavidA once sang...)

Justin Gurarini could teach Tim Urban how to capitalize on a winning smile and great hair to compensate for what might be lacking in singing and/or dancing. Of course, with Crystal's inevitable win, we'd have a super-awkward "From Tim to Crystal" bad beach movie follow-up.

Clay Aiken, having lost to the original Velvet Teddy Bear could give Big Mike a few pointers about how to use his massive circumference to charm the lady voters.

Diana DeGarmo could join forces with Katie Stevens to create the facebook page: I Missed My Prom to Be on American Idol. (11 fans)

Bo Bice and Casey James could do each other' shair.

Catherine McPhee could just stand in Lee's room and look pretty. I don't think he'd ask for much more.

Blake Lewis could come back and do an awesome beat box behind Andrew Garcia's send-up of the Paula Abdul classic "Opposites Attract" -- actually that would be kind of awesome!

Crystal Bowersox could smile patiently and pretend to need to hear whatever whoever has to say.

David Archuleta and Aaron Kelly could join forces for the ultimate back-stage Pokemon showdown, then it's time for snack.

And Adam Lambert...seriously, weren't you hoping for an Adam/Siobhan scream clinic?

In keep with the theme, tonight the lowest and second-lowest vote getters go home. Who's it going to be? Vote and leave a comment, and TWO books get added to the Idle Summer Reading basket!
Posted by Christmas with CWG at 5:27 PM